The Boston Custom House has had five different locations in Boston since 1630. I believe that this is the third location, started in 1837 and completed about ten years later. In its heyday, the custom house brought in 1/5 of the nation’s income.

I was blessed to be able to take a two hour tour of this beautiful building through a Meet Up group I joined here in Boston. It’s a tour usually reserved for the Marriott time share owners that stay here; but the Meet Up planner was able to get a group of us in for a very special behind-the-scenes look. I was able to join at the last minute…and am so glad a place opened up!

Photo taken of a photo in the Custom House.

Before it was built, the Custom House site would have actually been part of the water. Standing where I was, I would’ve swimming in the Boston Harbor if I was there in 1837. 3000 wood pylons were sunk into the seabed, and granite/brick were used to fill in the foundation.

In 1837, the building design was heralded as a marvel; it cost about 1.7 million dollars to finish. However, by the time it was finished ten years later, people weren’t as impressed. Styles had changed and it wasn’t as grand in their eyes. The original building was created in a Greek style, with lots of columns and decorative motifs.

The tower we see today was never part of the original design. When you are inside and look up, you see the original dome which was the original exterior. It is now interior with the tower built atop.

President Kennedy had the Great Seal of the United States installed in the dome in the 1960s. This is one of very few buildings outside of DC to have the privilege of displaying the seal. 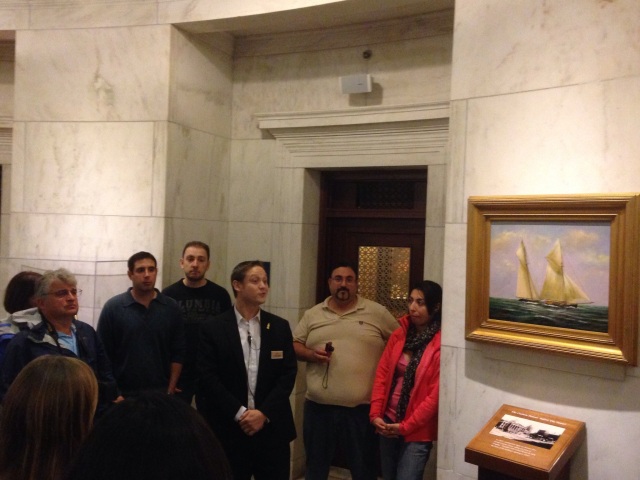 The Marriott tour guide, Matt, who is the activities coordinator and was a wealth of information! Also, part of our 35+ person group.

On the second floor, once the main level, you see the old main entrance. These doors are not opened often anymore…maybe five times since the 1980s, most recently for the filming of the movie Ted 2. They are heavy metal, able to withstand gunfire, with small windows where armed guards could point weapons out, while maintaining cover by ducking under the windows. You can still open the small windows today.

Note to self and readers, with its six foot plus walls and reinforced doors, this is the place to ride out the Zombie Apocalypse if it ever comes.

Also on the main level is the counting room, where staff would count the tariffs collected from the ships coming in. Lots of money came through this room; guards lined the balcony above to ensure that internal and external thievery couldn’t occur. 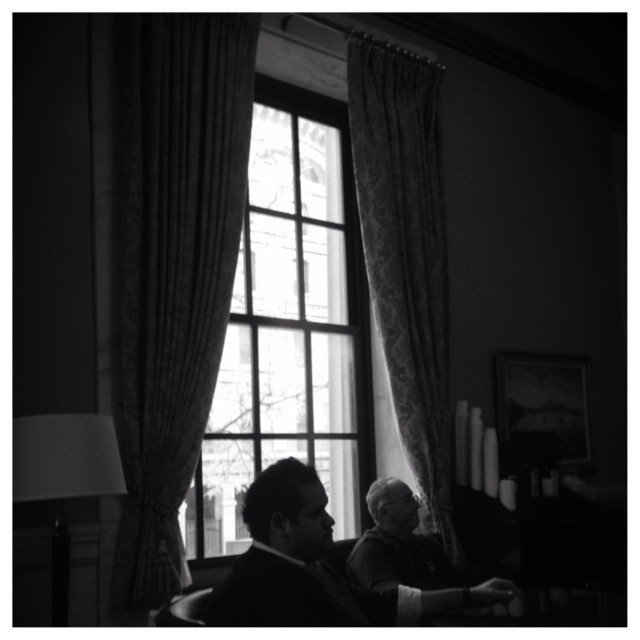 Outside the counting room, what is now State Street was actually a wharf – Long Wharf – that was over 2000 feet long. Another interesting fact, many of the streets in Boston have changed names over 300 years; for example, State Street used to be King Street (named by King George to remind America of English rule). We Americans changed many of the names in protest and evidence of our independence after the war.

Boats could actually sail right up to the building and even had two crashes into two of the windows that are shown above.

The outside balcony, now a separate level from the street, used to have steps that led directly into the water. Now, it’s a lovely place to sit and have a drink while overlooking the hustle and bustle of the tourist areas.

On the second floor (third floor from street level) you can see the banners of many merchants that helped form America. The one in the middle with the “x” is the Oxnard’s, a family who started out on the East coast, but moved west to help build the frontier and now have a city in CA named after them. What an entrepreneurial heritage we have here! 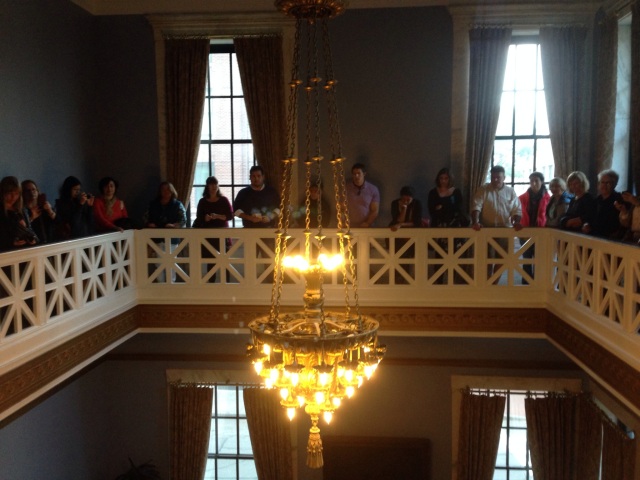 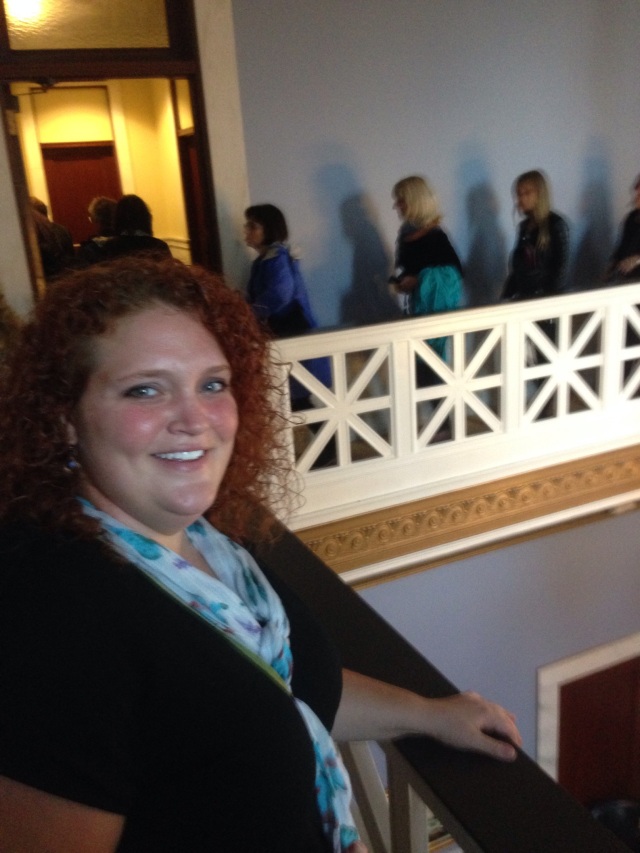 Also on this floor is the guard balcony for the counting room. It’s very narrow – only holds one person wide – although we did manage to fit all of our group around the perimeter.

The chandelier in the counting room is original from 1837. To change a bulb, they need three people – two to pull and hold it to the side of the balcony and one to actually change the lightbulb. Not a good day when a light goes out!

Also of interest, what is now the bar on the level below, used to be the safe. The safe was small as there were numerous underground tunnels in Boston at the time, built in the 1700s. The tunnels were built for smuggling, the Underground Railroad, and all the businesses. People saw many things come into customs house, but not much ever going out the doors because they used the tunnels to transport the money and goods. Supposedly they concreted in all the entrances to the tunnels in years past. It’s a shame as I’d love to take an underground tour of Boston like I’ve done in Seattle, WA.

Photo taken of a photo in the Custom House.
The tower on the Custom House was added in 1913. It only took two years to build. It is Italian Renaissance style which married well with the Greek architecture of the original 1830s-40s structure. The tower was built in only two years. This was the first skyscraper in Boston and remained the only one until the 1950s. The granite and marble used in construction were from Quincy and the Berkshires. The building is 496 ft tall and was the standout of the Boston skyline for 40+ years.

Our next stop was the 24th floor, where the four clocks on the tower are housed. Built in 1916 (the year my grandmother was born), the long running joke of Bostonians was that the clocks were a “four faced liar” because each clock had always displayed a different time. The glass box with the gears and miniature clock on top fixed that and now all clocks show the correct time. (Read the green sign for more info.)

An interesting fact: the movie Hugo consulted “with” the clock here to record sounds and movement to convert to cgi for the movie. When watching, you might actually hear the sounds of this amazing time piece! 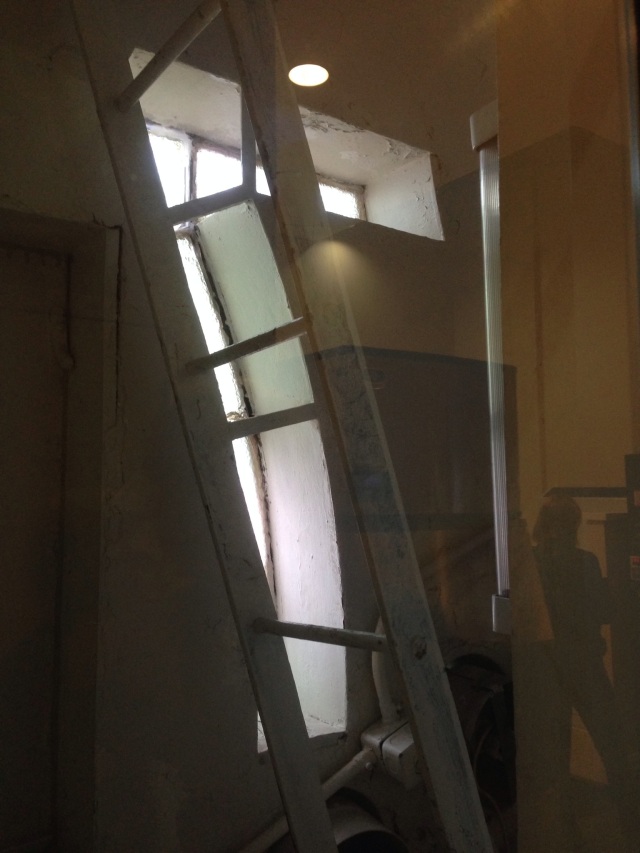 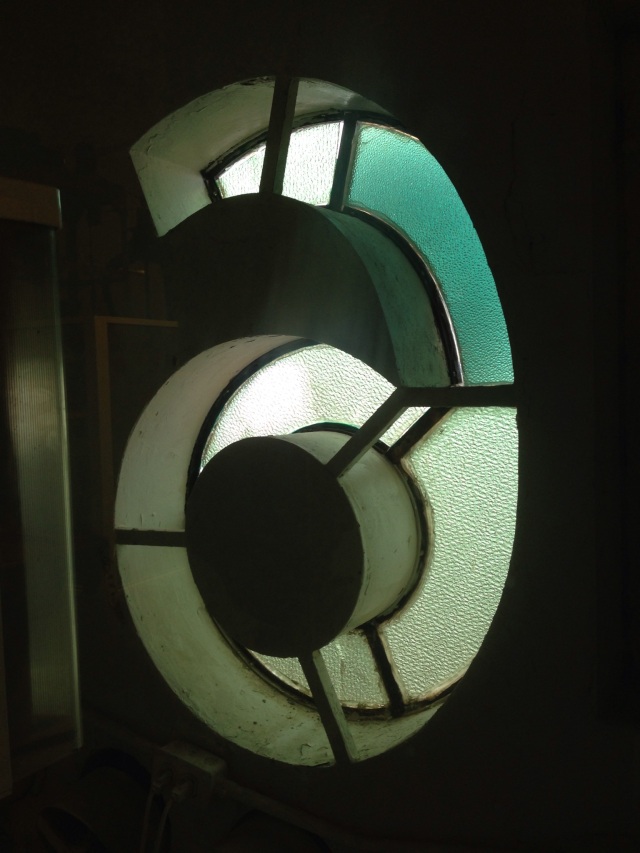 My favorite part was getting to look out a window/door and see the actual gigantic numbers seen from the street. 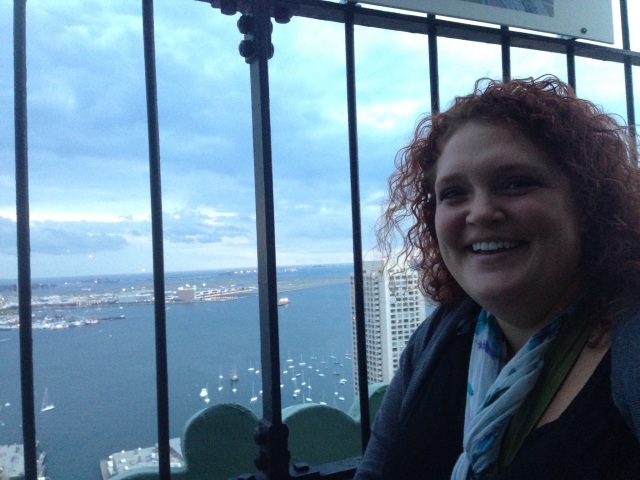 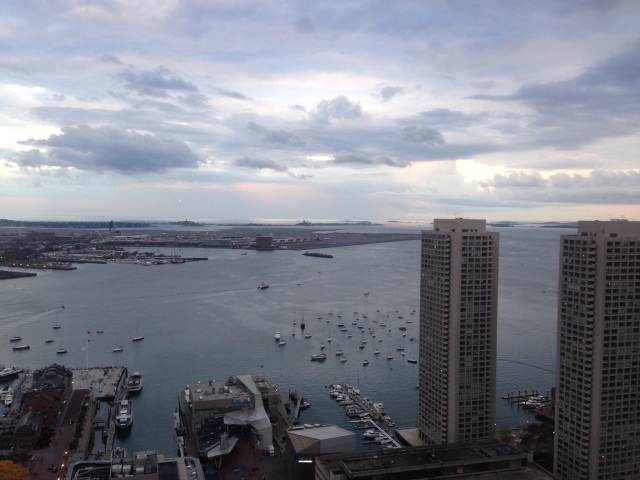 And the best part of all…two more floors up on the 26th floor is the observation deck, a place to see all the glory that is Boston!! My favorite view is the East view, facing the Atlantic, the islands, the Harbor, and the way boats sailed in and out from many different ports. During the 1700s, boats left for ports all over the world from here. It makes me feel small, yet large with pride in my heritage, and a small part of the greatness that is America. I can trace my ancestors back to the 1600s when they settled on Long Island, have had a forebear fight in every American war…who knows which ancestors may have set foot upon this port? I am destined to dream…

More views from the observation deck:

The North End and Charlestown with the Bunker Hill Monument.

Towards Cambridge and the Charles River. West-facing views. 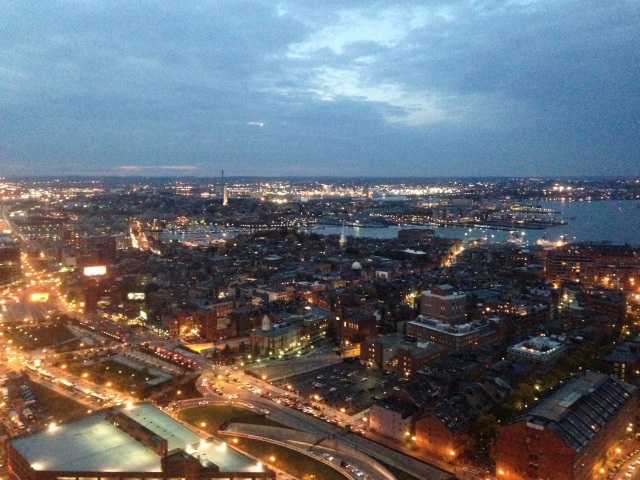 And glittering lights as night fell. What an amazing day!!

I’ll leave you with another night view…of the tower from the street. What a great day!